Ben the Books – Trader of the Month December 2014 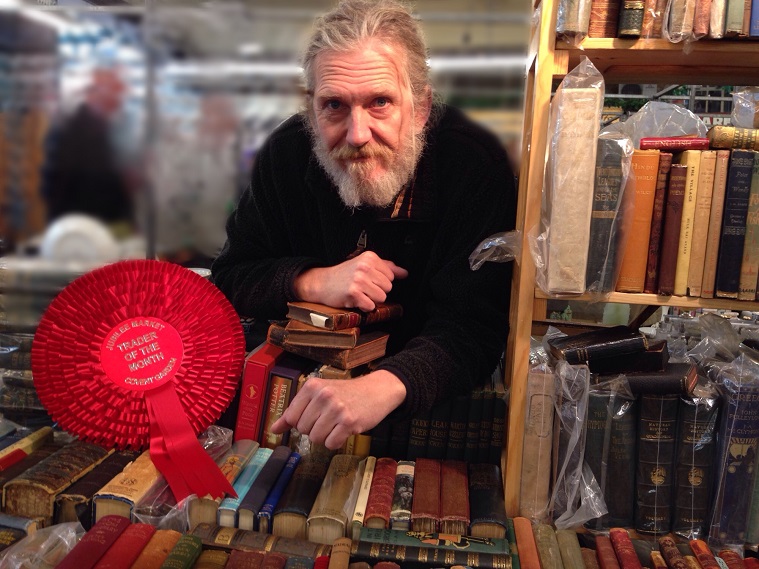 Benjamin Milsom began selling books, maps and paintings here at the Jubilee Market in Covent Garden four years ago, when he returned from 22 years abroad working the markets all over Europe based in Southern French Alps, where his work took him to the South of Italy, Spain, Germany, Switzerland, Belgium and Denmark.

Ben is from a City of London market trading family: his mother worked with his Grandfather in Brick Lane, The Waste (Dalston) and the ‘Cally’, back before it was called Bermondsey Antiques Market and moved to South of the river from its original site in Caledonian Road, Islington.

The love of books come from his father, he would always have his nose in an old history book! Benjamin can’t seem to leave them alone – they always have a secret to share, he has scoured most of Western Europe buying and selling them. Inside he is still a boy out on a treasure hunt in the woods, except his prize doesn’t glitter in the sun, just chokes you under dust and cobwebs! Benjamin loves his job and cannot see any other way more satisfying to make a living, meeting and talking to people from all over the globe and from different walks of life, never get bored with it. With his wife Lorraine they are constantly combing the country for something rare or beautiful and he believes that they will never stop searching: they are very lucky to both have the same passion which takes them on the road, where it is surprise every day.

London is his home and the markets are London, where we have the finest markets and the funniest people he has ever met.

We use cookies to ensure that we give you the best experience on our website. If you continue to use this site we will assume that you are happy with it.OkRead more